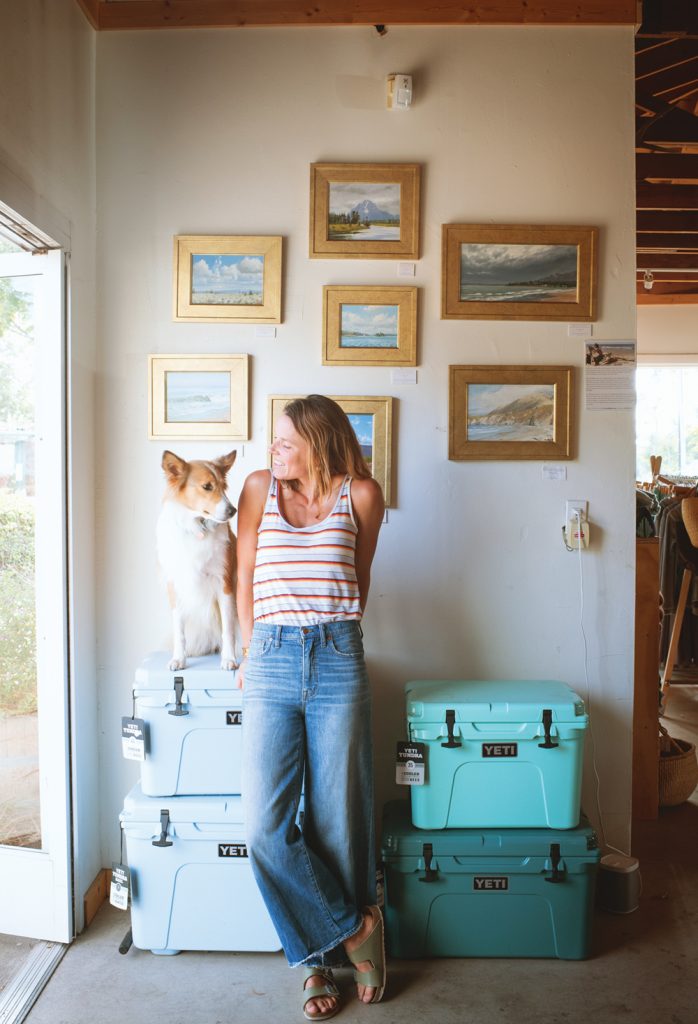 Honey and Emilie visit her work at Heritage Goods and Supply. (All Photos by Mariana Schulze)

A landscape and still-life painter, Lee calls Carpinteria home. By way of Vermont and with a stint in NYC, Lee settled in the small, seaside town just south of Santa Barbara two years ago. She wanted to be close to her fiancé, who had accepted a new position at the Patagonia headquarters. Lee cites the “small-town” feel, incredible climate (she is able to paint outdoors year round, and grow her own fruit and vegetables), the dog-friendly beaches, and Carpinteria’s emphasis on healthy living as definite plusses to her move.

For the most part, Carpinteria has resisted the inevitable development and big- box store takeover of many towns, and remains somewhat encapsulated in a bygone era.  “I live in a place that people go to on vacation, and that’s pretty dreamy,” Lee shares. “Carpinteria is very similar to where I grew up, a town where everything you need is on one street, a place that exudes such a family-friendly, safe feeling.” 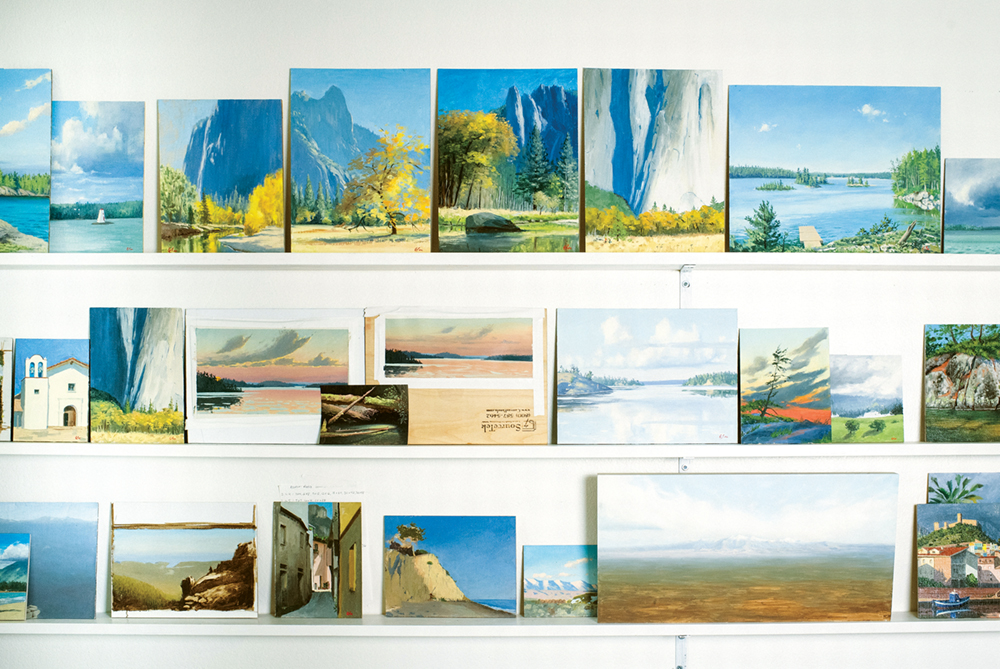 Emilie prefers to paint what she sees, in person, rather than from a photo.

As a girl growing up in Vermont, Lee’s mother, a painter, exposed her to art early on, sparking a life-long passion. Lee honed her skills at art school then went on the road pursuing her two great loves, the outdoors — more specifically rock climbing — and her art. From 1999 to 2007, Lee lived a carefree, nomadic life in her converted school bus. She painted the environment she climbed. “I was rock climbing as much as I could, living the real rock climbing life. I began painting landscapes as a way to connect even more with the nature around me.”
Lee traveled wherever the climbing took her, working odd jobs along the way and always painting. Eventually, she decided to go back to school, temporarily abandoning climbing to focus on her art.

New York beckoned, and Lee joined a group of professional oil painters who were teaching painting and sculpture in the traditional way, as it was taught in the 1800s. 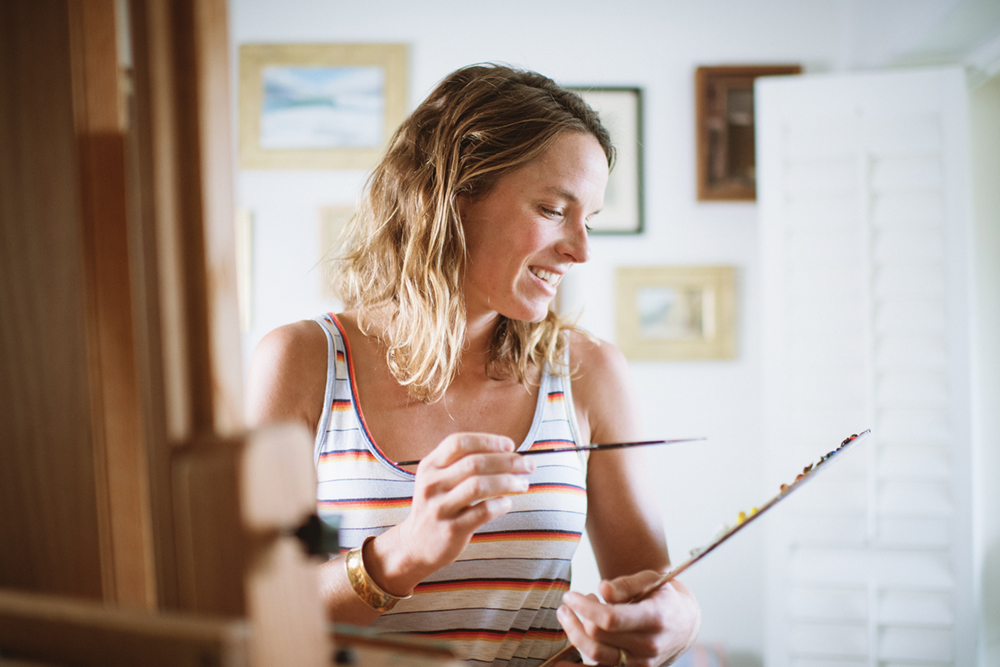 After years of painting out of a converted schools bus and then in New York, Emilie has now planted roots in Carpinteria.

“Studying at the Grand Central Atelier helped me focus on accuracy and on the technical aspects of creating the illusion of reality in my painting. I was inspired by other artists I met and the community there. The level of work that was coming out of the studio was incredible,” Lee recalls. But seven years of city life began to wear on this self-professed lover of nature. Inspired by her growing confidence as an artist, Lee packed up and liquidated her city life. She camped in her car, on the road again — this time on a pivotal, cross-country road trip. “I spent two months driving across the country, painting, camping, and visiting friends,” she says.  “That was a huge turning point for me. I was producing a lot of work and happily sold it all on Instagram as I was traveling.” 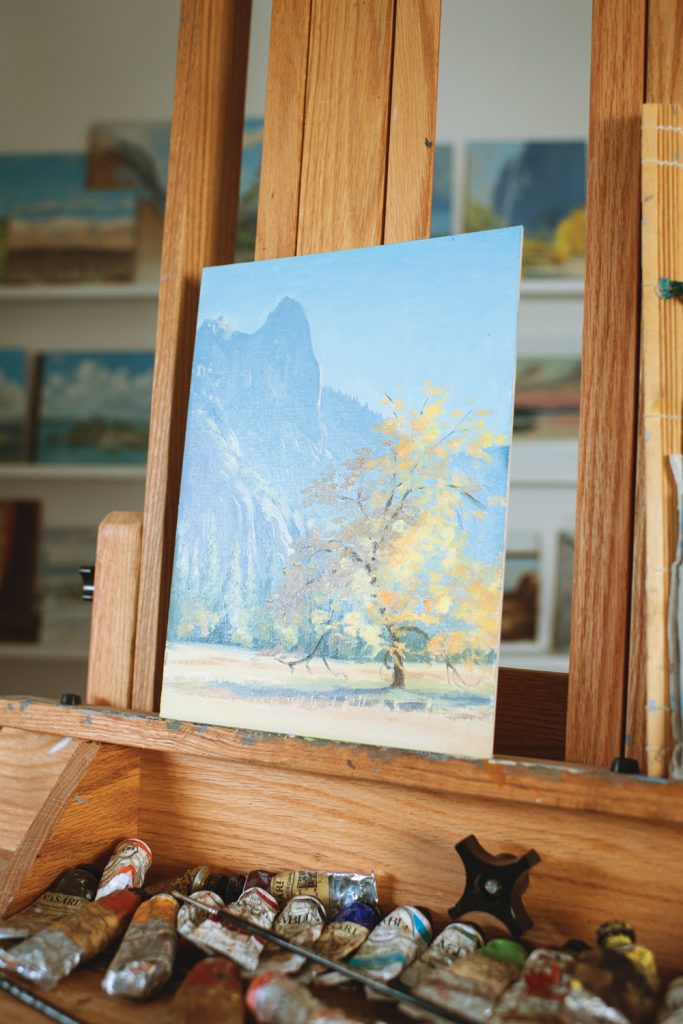 By the time Lee arrived in California, she had amassed quite a nest egg. She realized the life of an artist, with the help of using social media, could work well for her. Lee continues, “My main drive has always been the freedom of being outdoors and away from the contracts of society. I’ve tried to plan my life so I can spend more time outside, away from a computer, and work for myself.”

Now living in Carpinteria with her dog, Honey, and her fiancé, Kristo Torgersen, Lee often paints her local haunts, Santa Claus Beach, Loon Point in Summerland, the world-famous Rincon Beach, and the waves and surfers at Carpinteria Bluffs State Park. Lee adds, “I also paint at the top of Rincon Mountain at my friend’s place, Sweet Mountain Top Farm.” 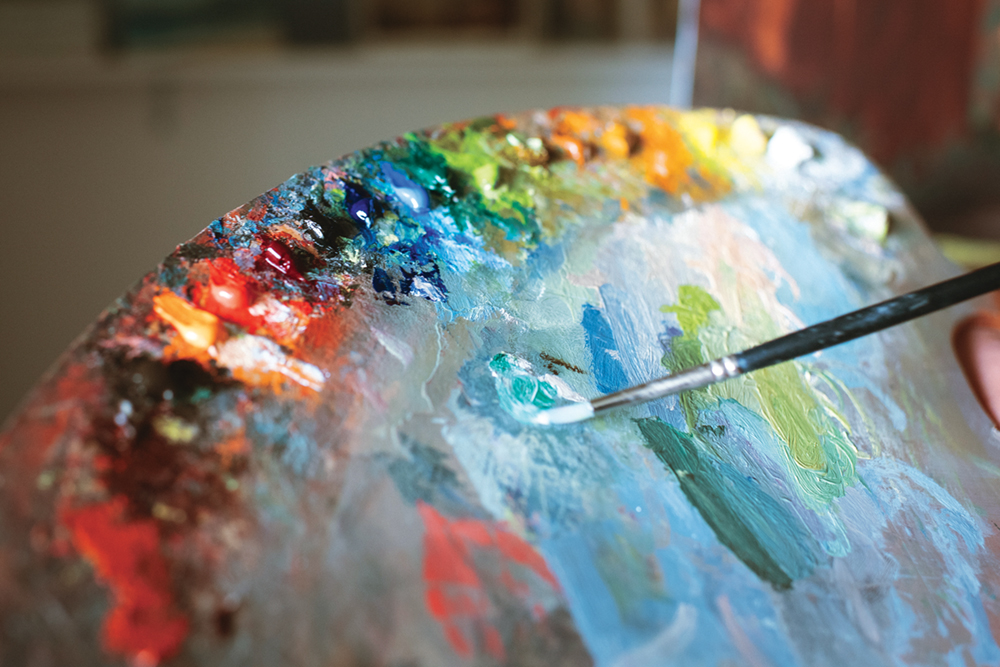 Emilie mixes colors on her palette.

Lee’s paintings are soothing to the eye, swooping and bucolic natural scenes; she paints with oil on panels which are often mounted with linen. She paints directly from the landscapes she sees, and does not work from photographs. She sees this as a way to keep her paintings more alive. Lee captures a scene before the light changes, which gives her about three hours to get a good start on a piece.

“Sometimes when there’s a storm coming in while the light is shining on the waves in the foreground, I have to rely on my memory,” she says. “Being on location, I have to work quickly and be in the zone to capture life. It keeps my work spontaneous.”

Emilie Lee’s work can be found and purchased through her Instagram as well as her website, emilielee.com/store. Lee also sells her paintings  at a local store, Heritage Goods and Supply, next door to the Lucky Llama Coffee House in Carpinteria.
Look out for an upcoming workshop  given by Lee, scheduled for Jan. 11, 2020,  at Santa Claus Beach in Carpinteria.  Register at emilielee.com